There was a promotion on windows so we hot footed it to the builders’ merchants. As they unlocked the doors I zig- zagged around the other shoppers whilst the LGB got boxed in by two trolleys.  I dashed to the menuiserie department and secured the windows.  You may wonder what the hurry was.  It was because there was a ridiculously small quantity of stock on special offer.

The LGB wanted something else that was also on promotion but the assistant said they would be in the following day.  Well that was enough to get Big Chief Moaning Minnie twitching for a war dance. If they were advertising offers the goods should be in stock, blah, blah, blah.  At the checkout the special offer on the windows didn’t register and the war dance was in full swing. He would certainly have scored a S-E-V-E-N from Len on Strictly. To be fair I was having a moan too, to each other you understand not to the cashier.  Then the cashier said the offers didn’t start until the next day, we had arrived a day early! However, she kindly honoured the offer.  The war dance turned into a little jolly jig of joy. 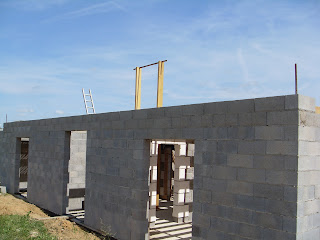 The LGB has constructed what looks a little like a gallow.  We have caught the neighbours looking and I am sure they will have been scratching their heads wondering what it was.  All was revealed when the LGB attached the new hoist to it. 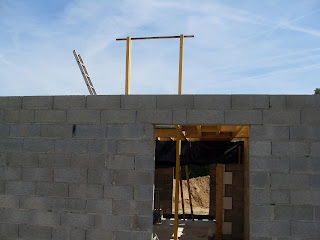 The hoist has proved invaluable.  I mix the cement and sand and shovel it into two large bucket bag things, up they go on a pallet attached to the hoist and Brendan takes them off at the top.  Easy peasy. Certainly much easier than the days in our barn conversion when we used to carry it up. 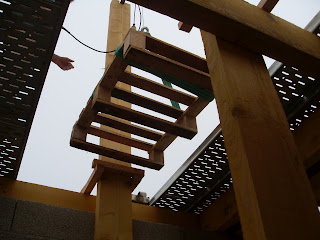 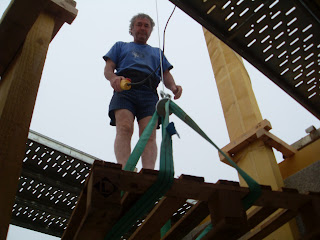 We have worked some very long days in very high temperatures this week.  Today the thermometer read over 40 degrees in the sun!!  I know that is not how you are meant to take the temperature, but we were in the full sun!  It is quite draining but despite the heat we are up to window height on one side of the house and have put the sills in two bedrooms and the two bathrooms. 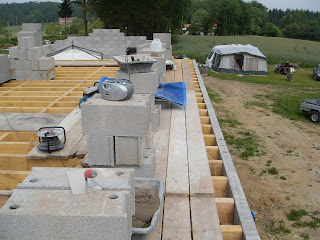 It has been a hectic week, what with building, completing and taking tax forms to the Hotel des Impots and trying to learn song lyrics.  I find any official ‘doings’ very stressful.  I have a fear of doing things wrong and being hauled in by big brother and given the third degree.

I am also trying very hard to get to grips with the songs we are singing with my choir Courant D’Air at a concert on Sunday.  We are singing in English (got that language sorted), French (struggling big time), one of the African languages (know that one), Hebrew (halfway there) and Romanian (I think it’s Romanian and I know that one).  I am the only Anglaise in the choir, I say choir but it is a chorale group of about thirty singers, a nice bunch.  We sing pop, jazz, gospel, scats, blues…….all sorts really.  Our newest song is ‘Chasing Cars’ by Snow Patrol.

I give Brendan the camera to take photos but he says it is pointless because I am always hiding.  It’s true!  Mostly it is because although I love singing I like to be in the background and the other reason is I am usually holding the words behind someone’s back! I know I sometimes put ‘moany’ bits in the blog, but believe me when I say it is very much tongue in cheek.  There are days when it all gets a little too much but we have to put these days into perspective. I am reading a blog just started by Brendan’s niece Julie, whose little girl has a very rare childhood cancer.  I know even my very worst days will never be close to what they are going through.  Niahm has been offered treatment in the USA (the NHS will fund the treatment but not a home tutor and they won’t pay for her little brother to go with them) and they are now fund raising.  If you get a chance, please read Julie’s blog http://www.allaboutniamh.co.uk/   and if you can help in any way either with a donation or you may know an obscure little charity who could help, it goes without saying how many people will be very, very grateful, and especially one young lady.

Email ThisBlogThis!Share to TwitterShare to FacebookShare to Pinterest
Labels: All About Niahm, http://www.allaboutniamh.co.uk/