Mary and Alan arrived with a harness from their climbing days (before they took to stunt riding on bicycles).  The LGB was trussed up and given a lesson by Alan how to use the ropes and karabiners.  The intention is for him to arm himself with a few tiles and swing along the top of the roof and place the tiles as he goes.  I would imagine it will be a bit like his own version of ‘Total Wipeout’ or ‘It’s a Knockout’ for the genteel elderly folk amongst you. This is exactly what he probably will end up doing – knocking or wiping himself out.  They were like two kids at the swing park; a very funny spectacle to behold.  I had some great photos but once again the computer whizz has managed to erase them.  When I retire from the building trade I will take a computer course. 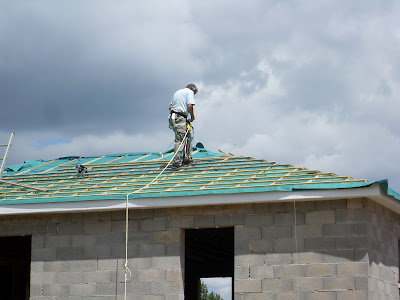 Monday morning armed with his ropes, karabiners, harness, dried food supplies, S O S flares and other paraphernalia the LGB set off to conquer the roof. 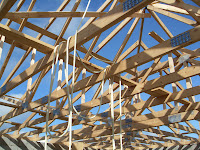 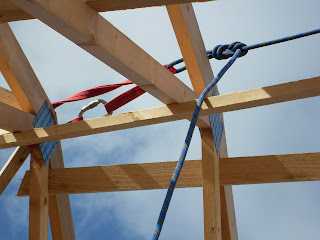 He has been working up a height in the blaring heat (thirty plus degrees today) and I set up shop down below in the shade with my measure, pencil, saw and electric chop saw.  My job has been to cut the tiler’s battens to length and sometimes put an angle cut on the end and pass them up to the LGB and also cut and pass up the roofing felt.  I have had to sit and await instructions, which has given me time to catch up on lots of bill paying, letter writing and I even had time to make a few cards.  We lost one afternoon to the searing heat this week and the next morning to the rain, but in my eyes we have made good progress.  The LGB has battened and cross battened in readiness for the tiles.

Floppy Lettuce
I popped across to the Petite Voisine, little neighbour, with a bag of wilted lettuce for her lapins and returned with the same!  She has four huge rabbits and about nine cute, fluffy baby bunnies that in a few months she will eat!  She poured the contents of my carrier bag onto the grass, ran into the house for a knife and proceeded to chop and cut the floppy pieces and placed 90 per cent of it back into the bag telling me it was perfectly good to eat tonight with some frites.  I had instructions to place it into a bowl of water and change the water every few hours.  Lo and behold my flaccid lettuce plumped up to many times its original size and would surely have won best in show.  It will be all round the hamlet what a wastrel the Anglaise is.  That morning she had killed, plucked, cleaned and portioned her rasp of guinea fowl ready for the freezer (that’s one noise nuisance abated).  Her husband, who stands a good two feet taller than her can’t do the slaughtering.  She showed me around their potager, I think she must be supplying Tesco with the amount of vegetables she is growing.
Most people have an ensuite; we had the luxury of an en jardin for a while, but already we have made some home improvements and shower block H has been upgraded and moved into the utility room.  Once again the glass fibre lid has morphed from its last function as a concrete holder to a shower base.  What a pampered life I live – you can keep your jacuzzis – I have not one but two garden hoses fitted together and filled with water that is then left to heat in the sun all day and whoever makes it to the shower first in the evening gets a luke warm douching.  Lucky for me the LGB enjoys a beer after a long day’s work.


The LGB has told me I am not to write about the surgical stocking.  So pull your chair in a little closer and I will whisper it to you and then it doesn't count does it.  We ordered the LGB’s surgical stocking today; we have opted for the light-weight summer number in black with a natty little peep-toe. You can’t go wrong with black can you?  Gosh, I might even find a box to keep it in and label it.   Thrilling!  So what was so bad about that?  If he was wearing women’s fishnet stockings on site some of your eyebrows may raise a little - but then again you’re a liberal bunch.  I have to finish for now as I am battling with the mosquitos and they are winning – plat du jour again.

A French Word
Now and again I come across a word I really like and the word for ‘poppy’ is one of them.  Le coquelicot  is pronounced like cock-a-leekie, but cock-a-leek-oh.  I couldn’t imagine it translating to a little girl's name though.  Iris is iris, Rose is rose, so they of course would be fine, Lily is lis, that could work, Daisy is marguerite,  no problem there and Ivy is le lierre, no, that’s not doing it for me.  And Dandelion is pissenlit, which you may have gathered means piss the bed and wouldn’t do at all for a little girl’s name.

When I greeted my choir master with a chirpy ‘salut’ which can mean ‘hi’ or ‘see you’ he picked me up on my pronunciation.  When he told me how to say it correctly I could have sworn that was how I was articulating it; apparently not.  He said I was pronouncing it sal-oh and it should be sal-ooh.  ‘Salaud’ (sal-oh) means ‘bastard’ or ‘sod’.  So for over three years I have been calling all my fellow singers bastards and sods!  How very rude!

I have probably told you before how much I love the site of the bales of hay in the fields.  I now have three of my very own bales in my field.  Another little thrill! 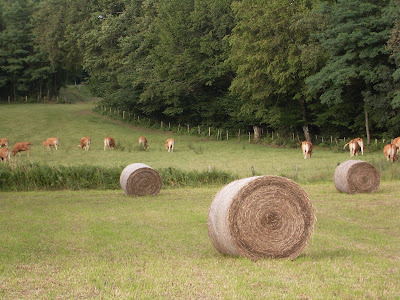 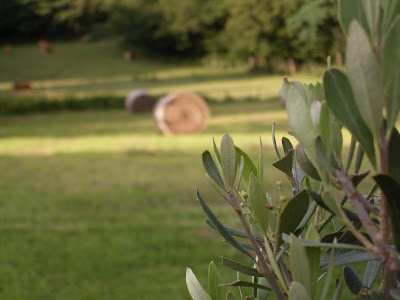