It has been a frustrating and infuriating week of ordering, buying and chasing around after things.  this all has to be done but inevitably takes longer than anticipated.  Internet connection would have saved us time and probably money, but we don’t have it and therefore have to do the best we can.

We registered with a new doctor as our lovely doctor retired in December.  We have found another delightful man who spent a good deal of time with us.  He commented on Brendan’s meagre two pages of medical notes and because he obviously didn’t want to waste a file said he would file them with mine!  However, the LGB still managed to come away with a prescription for a tetanus injection, ibuprofen, twenty sessions for his bad back with the crochet sadist (read the old post on Crochet Hooks), a pair of surgical stockings and a partridge in a pear tree!  Ok, I’m lying about the partridge. When the doctor asked if he needed anything else the LGB had to fight the urge to ask what was on special offer or not moving that he could take off the Doc’s hands.

I also had my blood pressure taken, thyroid check and tummy pummelled and then when I jumped off the table he said ‘Now wee please’.  I thought it was a bit much with both him and Brendan in the room and no receptacle to be expected to give a urine sample.  I said ‘Pardon’ and Doc said ‘Wee there’.  I looked into the corner where he was pointing expecting to find a door, little potty or porta-loo, but there was just a weighing scale.  Ah, weigh there!  Mystery solved, but it irked me somewhat that he obviously thought I was a podgy little porker who needed weighing as he hadn’t asked the LGB to weigh himself!  The diet starts Monday – again!  Brendan said it was a good job there wasn’t a kiddie potty there; I would really have been in a quandary!

Years ago I used to get a thrill when I bought a new pair of shoes (that was before I met Brendan of course).  I delighted in many a thrill as I had a vast number of shoes in every colour of the rainbow stored in labelled boxes with matching handbags (sad I know)! These days the work boots and fit-flops get chucked into an old fruit box and I now get my thrills in the wonder of nature.  You get little clues that life’s delights are changing when you start looking forward to the Chelsea Flower Show on the BBC.

Those of you who have read the blog from the start will remember my sunflower photo and how it had grown all alone on the mound of earth that had been heaped up from digging the foundations.  When it had died off I picked it and hung it on the terrace to dry with the intention of planting the seeds. I went to collect the seeds to discover the greedy birds had devoured every last one, despite the fact that I had been feeding them.  However, once again this year I have not one but two sunflowers growing on the heap and battling with many more weeds than last year.  What a thrill! 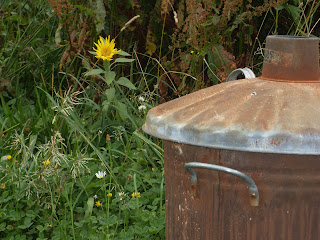 Sometimes I get the urge to use my hammer on something other than a nail head.  Today I dropped two lots of fascia boarding.  I say ‘I’ because I got the blame for not holding onto them.  I think sometimes the LGB has a thought in that little head of his that he thinks he has transmitted to his mouth and therefore I will have heard it.  Not so.  I have many talents but mind reading is not one of them.  Hence, if you let go of a three metre length of fascia and I only have hold of the first two inches it goes without saying that the counter balance will send it crashing five metres to the ground.  Perhaps a little ‘tap’ on the head with the aforementioned hammer will remind you to put those thoughts into words, Sweetheart!  The hammer is hanging safely in the shed and the urge has now passed.  (Since reading the draft for the blog the LGB has taken to wearing a hard hat!)

We placed our order for 2,700 Romane-canal terracotta roof tiles in the colour of Vieilli Castel.  We made this choice because as the name Old Castel suggests they don’t have the modern look of a solid colour of tiles.  These are multi-coloured and some have an aged look.

Materiaux Fourgeaud told us the roof tiles would be delivered at the start of the afternoon on Wednesday.  You can guess this hour and a few more hours came and went.  At 17.45 I called Fourgeaud to be told they would investigate and ring me back ‘tout de suite’.  I always thought ‘tout de suite’ meant straight away.  Silly me, I now know it means ‘in the morning’!  The next morning I was informed the tiles would be with us the start of the afternoon.  A feeling of déjà vu swept over me, but true to their word half the delivery arrived.  Where’s that hammer?

About 17.45 the other half arrived with the septic tank.  When the driver had finished unloading I noticed the tank was a 3000 litre and not a 4000 litre tank.  He muttered a few words and loaded it back on the lorry saying he would be back ‘tout de suite' with the right size. 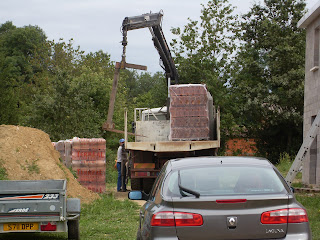 The most exciting, amazing, wonderful and thrilling thing to happen all week is the ride on mower is working again after a year out of service.  I can’t remember if I had written that we were quoted over 600€ for a starter motor; we finally got one with Alan’s help sent from the USA.  The cost including postage was 121€!  The grass has been cut again.  We’ll give the neighbours across the road with a lawn like the top of a snooker table a bit of competition now.
Have I mentioned the building work?  Next time then.
Posted by Home Wasnt Built In A Day! - Deborah at Sunday, July 15, 2012