Wednesday 9th May – The LGB’s birthday.  We were awake on and off with the rain last night and enjoying a cup of tea and a read at  5 am. Still, it was a good start to the birthday boy’s day.  A delivery arrived at 8 am and the rain dried up.  It has actually been a scorcher today. We finished the sides of the doorway and tomorrow we will put the lintel across.  The winch is working a treat. 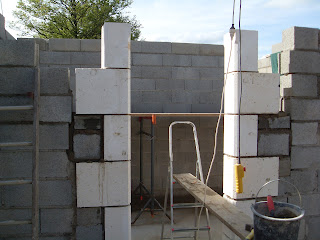 Brendan had to leave a hole in the wall for a blue tit family who have made their nest inside a concrete block and are feeding their chicks.  The poor things must have set up home when it was nice and quiet and now they must feel like they are living in a war zone.  For those of you who read the title of this post I am afraid that is as exciting as the 'tit bits' get.  Sorry if you are disappointed. :)

On the subject of wild life today we have evicted two slugs, a spider, a snail, two unidentified bugs, two bees and numerous ants.  Perhaps they have heard about the ark. To be honest the ants weren’t actually evicted, they were eliminated. The LGB said we should put down some ant powder.  I feel this will be all in vain as he is unlikely to eradicate every ant on our site, not to mention the ones in the farmer’s fields that are probably totally unaware that there are any boundary lines at all.  A mole has also come up into the awning.  Is he blind?  Can’t he see there is already somebody living here?  I don’t know how many attempts it must have made before finally finding a gap and tunnelling through; it must have quite a headache because we have laid chipboards and then laminated on top.  There’s posh!

Thursday morning we tackled the three stones (nicknamed Jagger, Richards & Charlie Watts), that would make up the lintel across the door.   They behaved very well and went nicely into place.


An Unexpected Delivery.    At 3pm on Thursday a lorry arrived with the roof trusses to the main house. We had arranged with Metiers du Toit to call them when we were ready for them . Of course, having had so much rain we are behind schedule (what schedule?) so hadn’t rung them, but they sent them anyway!  Another puzzle to ponder.

That evening we headed off on our ‘jolly’, a weekend with Mary and Alan to a little place close to St. Nazaire where they were starting another mammoth bicycle ride.  In a nutshell they are following the Rivers Loire and Danube and ending up in Romania in two months.  I’ve just made that sound like a doddle haven’t I?  It probably will be for them compared to their adventure last year.  I am exhausted just writing about it!

This expedition is only 4,000 kilometres!  Their last one was 7,500 kilometres!  Some people just aren’t consistent are they?  They also have a blog called Old Bones On Bikes Have a peek at their progress and if you really feel generous you can dip your hands in your pockets and give them a few pennies for their chosen charity ‘Medicins sans Frontieres’. 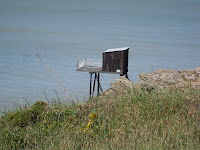 We had three lovely days.  We discovered a beautiful area of France (Loire and Vendee).  The weather was amazing and we played a teeny weeny part in M & A’s latest adventure.  I have, however, now lost my most ardent blog follower, Alan.
Their car is now safely parked up back on their drive.  The boot polish has done wonders to cover the scratches and scuffs! Good Luck to you both!

I would like to say we are now rested, but the LGB and I tend to try to pack as much as we can into our ‘jollies’.  We have at least had a change of scene and will be going hell for leather whilst the weather will allow us to do so.  Did I mention it had hit 35 degrees on Thursday?  I want to say that is far too hot for me but after all my moaning about the rain……………..