Summer arrived!  There was no forewarning.  Spring didn’t stroll along with us, holding our hands and lead us sedately into summer.  There were no little teasers for the heat to come. There was no mellow preamble, just wham bam here I am. The heat was intense with no let up.  However, those sizzling days of summer now seem a distant memory.  The cranes are departing to warmer climes shouting their goodbyes as they fly overhead.  Since the last post basically it has rained every day which meant the LGB couldn't do what he planned to do so he's plastered every day.  Let me rephrase that because that doesn't show the LGB in a very good light. The LGB has plastered every day, not the LGB is plastered every day, although I am sure he would not turn down the opportunity to get plastered any time soon. 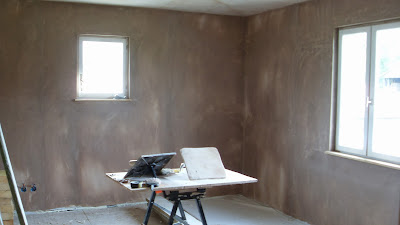 He was coming along swimmingly with the fireplace and chimney in the kitchen/family room when Sod’s Law came a-calling.  No sooner had he opened up the roof and begun building the chimney than the rain arrived and he had to cover it all up.  Do you know the Charente is meant to be the second sunniest department in France?  Well someone tell the Big Man because you could have fooled me.  I have hardly been further than the post box for days.  It is during these days of relentless rain I miss having a shopping mall close by just to escape the weather and enjoy a mooch in the dry.  Then to rub salt into the wound we had a flurry of snow …….in November!

But every cloud has a silver lining and the rain has meant we have just knuckled down to working indoors.  The bathroom floor has had a fourth coat of varnish.  The LGB has worked like a Trojan from morning until late and has now plastered every ceiling and wall upstairs.  What a difference it makes!  My next job is to paint the rooms.  White to start, until I decide on colours or wallpaper!  Sales of paint brushes will go through the roof.  I’m still not washing the brushes!

Whilst the LGB has worked his little socks off my days are much easier. I have been varnishing doors and I have spent many hours sanding down a unit for the family bathroom. It would have been easier to head to everybody’s favourite Swedish shop for a new one. Why do I do it? I seem to be under the delusion that I was put on this earth to rescue things that other people have made redundant and save them from the scrapheap. One person’s junk is my piece of well-made furniture at a fraction of the cost of a new piece (unless you go to the Swedish shop).  This one has dovetail and mortice and tenon joints. (I wrote that like I really know what I'm talking about, didn't I?) Other bits I have bought have place names and surnames pencilled on them, maybe the maker or the client’s name? I do wonder at the history of my bits of junk, who owned them, where they were housed. Hence the garage is full of pieces of furniture waiting to be spruced up.


When I was back in the UK I partook of an Annie Sloan furniture painting afternoon at Marilyn & Melrose in Alnwick, Northumberland. Annie Sloan developed paint that you can use on almost anything even fabric covered furniture and shoes!! If you don't believe me have a look wriggle test here! The afternoon was enjoyable if a little pricey at £65, but we did get a delicious slice of cake and coffee.  The LGB says if he stands still too long he is fearful of being Annie Sloaned!  That could become a bit of cockney rhyming slang ‘Cor blimey, he was Annie Sloaned last night!’

Now we are enjoying a little break in Strasbourg at the Christmas Markets. Hopefully some time in the not too distant future I will post about it.
Posted by Home Wasnt Built In A Day! - Deborah at Thursday, December 05, 2013