No Rest For The Wicked.

The LGB said he had really enjoyed today and was pleased with what we had accomplished!  I’m sure I used to have a day off on Boxing Day.  In fact it was a great tradition to spend it at the Club in Sonning-on-Thames.  Meeting up with friends, a few drinks, showing off your new Christmas jumper/scarf/bunny jacket (that was 1973ish, mine was yellow and Donna’s was pink!) you know, generally having a fun time.  No bunny jackets today just a donkey jacket - today I spent Boxing Day on site!
In France only Christmas day is a holiday.  Mind you they make up for it during the rest of the year with public holidays and strikes.  We have been caught out many times by closed shops.  The other thing that has caught us out is lunch-time closing.  Not long after arriving here we heard an announcement over the tannoy in the local builders’ merchants.  Of course we didn’t understand the message that they were closing for lunch and got locked outside in the yard.  The assistant who answered our banging was not amused to find us doubled up laughing like two school kids behind the closed shutter.
There are other annoyances here that make Brendan do his little war dance every so often; He can never find a straight piece of wood.  Every joist, batten or rafter is bent and twisted.  Getting a discount is nigh on impossible – one bag of cement is €6, ten bags cost €60 and one hundred bags cost €600 and so it goes on.  Mind you, we have had three free   t-shirts and two woolly hats from Priba where we buy most of our materials.  Stock control is almost non-existent with goods frequently being out of stock.  If you are lucky enough to find the item in stock it’s not priced and if it is priced it will often go through the till at a different price, usually more expensive.
Thursday was earmarked for the concrete pour, but that was scuppered when we went to order it to find the concrete plant is closed for Christmas.  Oooh there he goes again, the LGB doing a little dance, steam coming from his ears – not a pretty sight!
''I knew I shouldn't have gone for the turbo zimmer.''
Posted by Home Wasnt Built In A Day! - Deborah at Thursday, December 29, 2011 No comments: Links to this post

Batten Down the Hatches

Don’t get excited there is nothing of any great significance to report.  That was very presumptuous of me to imagine you could possibly get excited reading my building blog!
We have continued to barrow sand and blocks to the terrace area.  The LGB managed to get the foundations done for the terrace whilst I spent the day Christmas shopping in Angouleme with Suzanne.  It was exhausting!  We had to stop for lunch and a coffee.   I expect Brendan was pretty tired too!
I spent the summer complaining that it was too hot to work and now we are complaining about the rain.  Yesterday we managed to get the retaining walls built for the terrace in between running for cover from the downpours.
Marcel, the neighbour, told us there was a big storm on the way.  The mayor also turned up.  Had he arrived two minutes earlier he would have caught me in an embarassing position with my little bucket.  He asked if we were living in the caravan.  I thought, ‘Here we go.  He’s going to slam another tax on us; A Living as a Traveller Tax or a Temporarily Homeless Tax’.  I thought he then went on to say it would affect the sale ‘la vente’.  I nearly said the bloody things not built yet, I’m hardly planning on selling it. However, he had also stopped to warn us about the impending storm, and was talking about ‘le vent’ the wind.
I thought I would make a little small talk by telling him about his mother visiting us to offer us the hard-core; however he couldn’t understand me so I repeated it in English, still he couldn’t understand.  Now I am not sure what to make of that because by profession he is a translator – French to English.  He actually speaks perfect English, albeit never to us!  I’m signing up for English lessons next term.
Had ‘la tempête’ not been mentioned we would have toddled off home in ignorant bliss.  Now we had a dilemma – did we take down the caravan awning or not. I decided to phone Mary for advice.  We decided we would collapse the awning to be on the safe side.
We visited the site today and all was still in place.  We have a ready-made swimming pool where the terrace should be, but not even a flower pot had blown over.  I can’t see that there will be much progress this side of Christmas, but who knows what Santa may bring.
Posted by Home Wasnt Built In A Day! - Deborah at Friday, December 16, 2011 No comments: Links to this post

Pin The Tail On The Donkey! 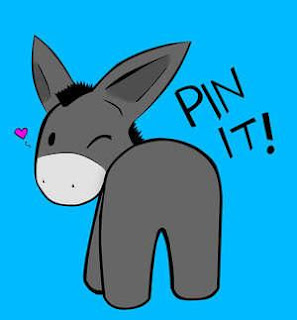 Pin The Tail On The Donkey!
I know, I know…….it’s not the orthodox way to decide where the electric sockets are going to be positioned but when all I can see is a hole in the ground it just seems to be the easiest option.  I shall just hang the plans up, put on a blindfold and stick pins in random places.  I know wherever I decide to put a socket it will be the wrong place.
I am having to make life changing decisions here (slight exaggeration) about where to place my sink, washing machine, fridge etc.  Why have they suddenly become MY sink and MY washing machine?  Probably for no other reason than I spend most time in the company of these things.  The LGB (Little Geordie Builder – I think that is what the B stands for) has deemed the kitchen to be my domain and therefore all decisions are my responsibility.  God forbid if I get the ‘ergonomics’ wrong or if my perfect ‘working triangle’ goes pear shaped.  Will I end up with my own Bermuda Triangle where everything disappears never to be found? Nothing new there Brendan would say!
Posted by Home Wasnt Built In A Day! - Deborah at Saturday, December 10, 2011 No comments: Links to this post

The site is like a quagmire.  We are sliding about like Torvill and Dean.  OK not quite as elegant, but I would like to see them skating (skidding) along with a barrow full of blocks and still stay upright – glad to say I did,  just!


We are back to pre-digger days having to transport the sand in barrows.  The digger would do it in a tenth of the time but it would just mess the land up even more.  Brendan is worried that it will get into too much of a boggy mess for the concrete to be delivered.
I know I should be pleased for the sake of the farmers that we finally have some rain but…….  If only we had been two weeks further on we would have had the concrete base down and therefore able to carry on building even in the rain.  However, for us it is just an inconvenience and means it will take longer to get the build done.  For the farmers it has been a catastrophic summer.  Whilst we enjoyed a summer of brilliant sunshine and very hot days the farmers suffered and lost crops and animals in the drought.
We finished at lunchtime when it rained even harder and spent the afternoon looking at and pricing up windows and doors.  I wonder if choosing would be easier if money was no object?  Knowing myself as I do I would say it would be much more difficult. 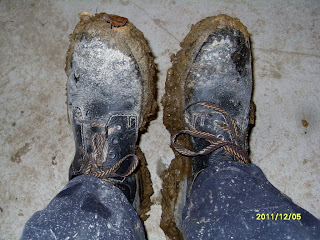 The new shoes are really looking the part! 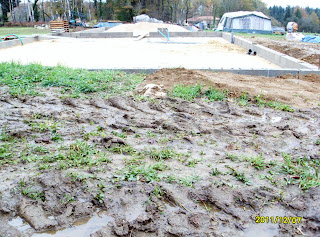 Pain Stops Play
Thursday, Brendan spent the day in bed with a bad back!  He is going to rest it for the weekend and hope for the best for Monday.
Posted by Home Wasnt Built In A Day! - Deborah at Friday, December 09, 2011 1 comment: Links to this post 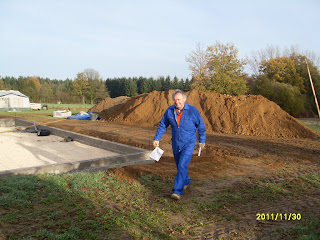 Here we have Brendan modelling a natty little number in royal blue.  These ‘combinations’ are the costume de rigueur in these parts. It’s a bit worrying though because every time he takes off a layer he does a Houdini act and I am sure he will either dislocate a shoulder or get so tangled that he will have to be cut loose (or not!!).
Yesterday we had a visit from la mère of le maire.  (Every commune here has a mayor.)  She had seen us collecting hard-core in the form of a tumbledown building and said she also had some stone if we wanted it.  We don’t need any more hard-core but we said we would go and look at it because we suspected she just wanted it removed from her garden.  We went along and also met le père of le maire.  The stone was only good for hard-core but I thanked her and said we would take it.  There was one interesting piece of shaped stone that she said had come from a grave and used to have a metal cross attached.  We are going to make it into a bird table!
They are a delightful couple.  Monsieur proudly showed us his ‘English’ lawn mower, his green-house and his garage (he used to be a mechanic).  We came away with apples and tomatoes, stone that we didn’t really need, and two new friends.
It rained overnight which has made the ground boggy but unbelievably it’s December and it was a beautiful, sunny warm afternoon!  Long may it last.
That was yesterday – it rained all day today!!  No site work today, just house-work.
My steel toe-caps have given up the ghost.  They have served me well.  I am going to bury them in the foundations with a note inside with details of who built the house and when! 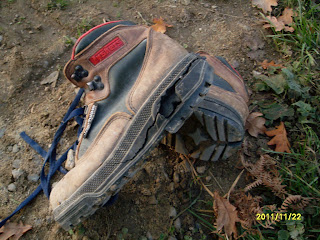 Posted by Home Wasnt Built In A Day! - Deborah at Saturday, December 03, 2011 1 comment: Links to this post