Our friends Mary & Alan of ‘Old Bones On Bikes’ fame have been renamed ‘Old Broken Bones Off Bikes’.  Sadly Mary fell off her bike in Hungary resulting in a broken arm which necessitated a return home three quarters of the way through their latest adventure.

The LGB and I downed tools on Saturday to ‘nip’ to Paris to collect them.  I had tried to persuade him to spend a couple of nights in the city of romance but he was having none of it.  He wanted all the building work completed in readiness for starting the roof. Who says romance is dead?  Gay Pareeeeeeee will have to wait.

I take my hat off to the Old Bones for the ground they did cover – not in my wildest dreams could I manage such a feat. Bravo!

Another broken arm occurred when the LGB continued his new habit of dropping things from a great height.  The casualty this time was a garden chair.  In the event of my sudden, sad demise, if his plea is ‘It just fell from a great height onto her head Your Honour’ the clumsy clot will probably be telling the truth.  Have I just signed my own death warrant there?


We had a very unwelcome guest come to visit this week.  As I walked towards the awning I startled a snake that then decided to join the LGB in the awning.  My hero was very brave (well braver than me) and like St. Patrick he chased it from the purlieu (hey Mary, that's a good word!)  Bears Grylls would probably call it a garden worm and at about 2 feet in length it certainly wasn’t the largest we have encountered, but I would rather not see them at all.  However, with a field of wheat growing next to the caravan I fear this may not be the last we have seen of Hissing Sid.

On 21st June each year the whole of France have a Fete de la Musique.  Free music from rock to umpah bands and African drums are performed in the streets and venues.  We usually go into Angouleme and enjoy an evening where the streets are buzzing and there is always a great atmosphere. The past two years on this night I have performed with my chorale group.  Whilst I love being in the group and singing it does mean I don’t get to enjoy as many performances during the evening as I otherwise might.

Being the token Anglaise, I am the only one performing with the lyrics, which I print on small pieces of paper.  This performance I forgot to take some of the words which threw me into a tizz and because I change between singing soprano and mezzo I forgot to change places for one of the songs so just mimed to that one!  Well, if Cheryl Cole and Britney Spears can do it then so can I!

Up On The Roof
Zippidy doo dah, zippidy ay, my oh my, what a wonderful day!  We have started the roof/puzzle!  Mick our helping hand comes with good credentials.  Rumour has it when he was six years old he was completing puzzles for ten year olds; he also wealds a mean hammer and can jump around the trusses like a monkey in a tree.


Actually, it wasn't easy peasy.  It was heavy and exhausting work and even the LGB was shattered and probably suffering a little sun stroke.

On Tuesday we endured an incredibly hot day full of good humour and banter and really broke the back of the daunting task of putting up the roof trusses.  We were both delighted with the progress.  More of the same followed on Wednesday in even hotter temperatures.  We decided two days working in such intense heat was enough so offered Mick a get out clause by asking if he would like a day off until it had cooled, thankfully he jumped at the offer.

Friday, with Mick back on site we completed the roof trusses.  Hallelujah!  All the LGB and I have to do is bolt brackets onto the ring beam and nail them to the trusses.  We do still have the roof of the single storey to do, but that certainly doesn’t seem so overwhelming.  Happy days! 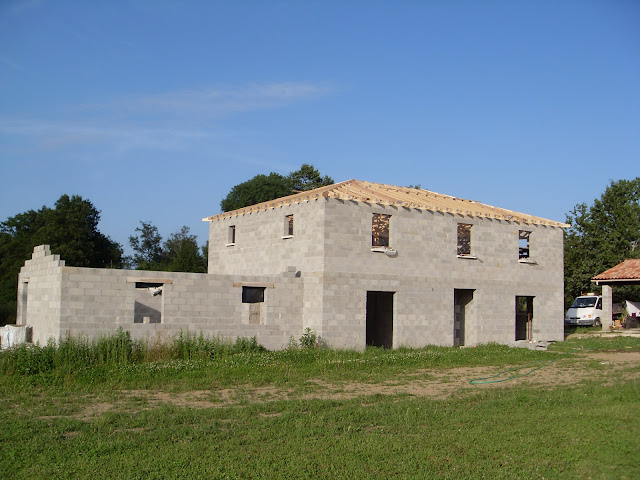 I am trying this new blogger.  In the top left corner you can choose the style you would like to read it in.  What do you think?  This or the old style? xx