Our blue tits flew the nest except for one who landed on the floor.  The LGB attempted to get it air bound but to no avail.  I put it into a box for safe keeping. 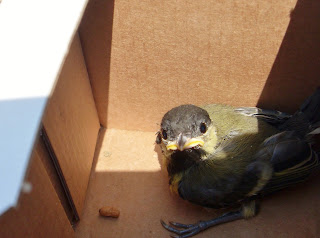 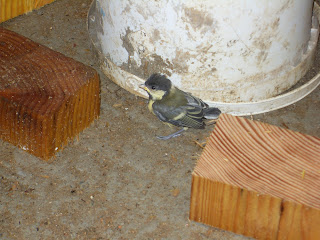 Why is it when you don’t want one you are likely to find a caterpillar in your salad but when you need some for lunch (blue tit’s not mine) you can’t find one anywhere.  Brendan found some worms and the fledgling was very hungry for them but the poor little thing seemed unable to eat them dangling from tweezers.  I  syringed them up and fed them to it.  I settled the little bird on my brand new, never been used, hot water bottle (a Christmas pressie from my Dad; I’ve already told you how he likes to keep me warm).  Sadly, my little feathered friend didn’t make it through the night.

Monday was frustrating.  A lot of the day was spent trying to source a starter motor for the ride on mower.

Promotion
Tuesday was a good day, albeit a long, hot and exhausting day.  In the afternoon my jaw actually hit my knees in shock when the LGB said ‘You can build along to meet me’.  I really was speechless.  At last after 10 years as an apprentice/labourer I was being promoted to brickie!  No, no, no, you’re getting above yourself girl!  I was merely required to fill in between the joists with blocks.  Not quite the promotion I have been hoping for but some block laying nevertheless. 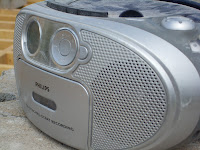 All the LGB needs is his music, his Willie Nelson bandanna and glasses and he's ready to go.

Musical Statues and Mountain Goats
Wednesday and Thursday we continued building the first floor.  Today, Thursday was extremely windy.  Some of you will know I am no mountain goat as Mary and Alan will testify.  I have had the heeby jeebies with them on a mountainside.  They will be asking themselves 'What mountain, that was a hillock'.  I am not terribly comfortable up a height and now and again I freeze and have to be rescued by the LGB.  I must look a right twit from the ground - like I'm playing musical statues all on my own.  A couple of times I really thought I was going to be blown off the building.  The day was also hampered by a humongous thunderstorm.
As the rain started the LGB suggested I clean, wash and put away everything because he thought it was here for the day.  Now you know how much I detest washing out the mixer.  I also have three large trays, two bucket bag things, a shovel and three trowels to wash. However, the downpour and thunder only lasted just past lunchtime when the LGB decided we would continue building.  I was not a happy bunny to find myself once again cleaning all of the above at 7 pm.


About 6 pm the LGB disappeared and Snow White sent Grumpy to replace him for about an hour!  The LGB was having trouble with one window sill that didn’t want to sit level.  Grumpy mastered it and I now have ten window sills in upstairs with one to go in. 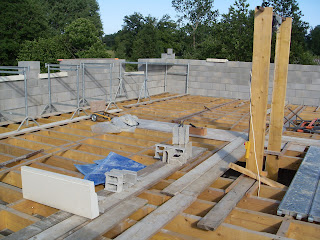 To be fair, although today I had to work with Grumpy the LGB often has to work with one or the other of Snow Whites vertically challenged colleagues. Quite often it’s Dopey, mid-afternoon Sleepy drops by and by end of day Grumpy usually makes an appearance. But I like to think more often than not he is working with Happy, he would probably say otherwise.