It's a worry!  I am forever looking for my glasses for painting and reading and they are usually on my head, sometimes two pairs.  I hunted high and low for my shoes in the week and I was wearing them.  My friend told me I had lost an earring, but I had put two in one ear.  It's a worry! 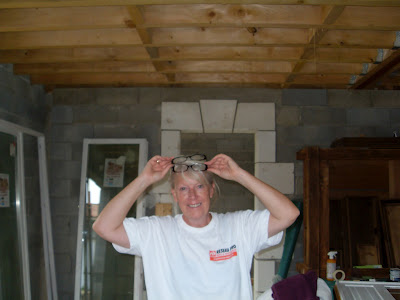 The guttering is on on the main house, just the downpipes to be fitted, but the single storey has yet to be done.  The roofs are now finished apart from the pointing.  The plaster boards were delivered, all 119 of them.  The driver wished us ‘bon courage’ and we duly carried them into the house.  Usually where plaster boards are involved a little conflict ensues.  Not this time because, according to the LGB, I listened and did as I was told!!!!  Oh, I play the little woman role so well…………… must stop biting my tongue because it is really, REALLY starting to hurt!  I must concede, it did go well, but they have yet to be transported to the upper floor. Pass the boxing gloves and the gum shield. 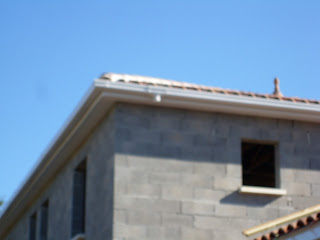 Today the LGB painted a couple of frames as I had an appointment with a nasty radiographer, but that is another storey.  ‘I knew I would end up painting some of them’ says he.  ‘It’s not a crime, is it?’ says I.  Give the man a knighthood for deigning to pick up a paint brush!

Before commencing the painting the LGB did a little stock count.  One of his posh brushes was missing and two of my less posh ones.  Had I realised he was going to help I could have covered my tracks somehow.  However, he ranted and raved about me and paint brushes for two minutes then carried on.  I have actually been using the same two brushes for all the windows and I can’t recall what has happened to the ‘missing’  brushes.  So my darling man you must get over it, they are just paint brushes.  You can moan and nag all you like – I am not going to become Saint Deborah the patron saint of paint brush cleaning.  There is actually a patron saint of painters, St Luke.  Although he is more likely to be looking out for the likes of Zeng Fanzhi or Peter Doig than your common or garden painter and decorator.

The couple we bought the land from stopped by on Saturday.  After the ‘tour’ Jean Claude said we had a water source in the field.  We had thought we must have as the neighbours have a well, but we were delighted to have it confirmed.  He said it was not deep and a ‘sourcier’ would find it for us with a pendulum or a divining rod (baguette).  Later the lad two houses down dropped in.  I thought being of the younger generation and working as a computer whizz he would pooh-pooh the ‘sourcier’ bit.  Not at all, he said it really did work.  I said the LGB had his own method of dowsing; let daisy the digger loose!  Just another little project when we find ourselves twiddling our thumbs.

No day of rest this Sunday.  We stayed with the Old Bones on Saturday night to partake of our weekly ablutions and imbibe a tasty repast.  The LGB and Alan enjoyed steaks the size of fireside rugs.  This brings to mind the LGB ordering a steak in a restaurant.  The LGB likes his steak rare – saignant so when the waiter asked how he would like it cooked he replied ‘mignon’.  An easy mistake!  Mignon and saignant sound almost the same except for the M and S of course.  Well they sound almost the same to us but probably not to the French.  The waiter looked quite bemused, not sure whether Brendan was saying he was cute or asking for a cute steak!  So Sunday was spent…………….. you’ve guessed it, painting windows. 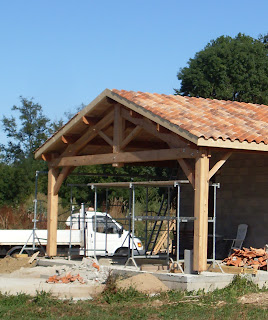 I started back at choir on Monday.  We started a new song ‘Help’ by the Beatles.  I was asked to read the lyrics aloud which merited a round of applause at the end.  Oh that my French would get the same response!  I flit between singing soprano and mezzo.  I opted for soprano for ‘Help’, but came away with a sore throat.  My voice seems to be getting deeper.  I think my working environment might be a cause?  I suppose you don’t get many soprano builders’ labourers do you.  Crikey, I hope a pair of b*ll*cks doesn’t drop any time soon.