We actually used last Sunday as a day of rest.  The LGB took it to the extreme and didn’t actually vacate his pit until nigh on midday!  His excuse was Dr Crochet had told him to rest his back (I didn’t begrudge him his lie in as he works hard and doesn’t often lie in).  I on the other hand was mooching around the vide grenier in Vitrac St Vincent about 8.30, munching viennoiseries with coffee.
It’s a lovely little village, and there was a good turn-out for the car boot sale.  I was, however, sad to see that the little bar was up for sale and the proprietor was selling off his chattels.  We have seen so many small local bars close in our time here.  I am not sure of the reason for the closures, but it is sad to see them go.

The LGB wasn’t there to keep me in check, so I spent more than usual and came back with amongst other things an old wooden wine box and an old metal tractor seat!  Don’t ask, because I am not sure, but I will let you know when I know!
I lured the LGB out of the caravan with a hearty brunch and we spent the afternoon ‘gadding about’.  We visited Le Hameau de la Brousse which I shall write about in greater depth at a later date; for now I will say, perhaps we are just art ignoramuses (ignoramusi?), but we just didn’t get it!

We came away from a Medieval Jardin in Dignac with some ideas and visited the ‘office’ (Quick Burger) in Angouleme for the football scores!  We are now chilling with red wine and a gourmet feast of peanuts and twiglets!

We have been doing the other side of the roof on the kitchen/terrace this week.  I have been more involved with this roof and enjoyed it.  We have also ordered the chestnut flooring for upstairs.  We had chestnut in our last home, this time I have opted for a slightly wider board.  We are buying it direct from a small business that brings the trees in (they may even grow them) and cuts and dries them.  So we are doing our little bit for the environment by buying locally.  We did have the opportunity to buy some reclaimed oak which I would have loved (and it would have saved us some money) but it would have involved a lot more work to relay it and at this point in the build we really don’t need any extra work.

We have bought the plaster board that was on promotion at Bati LeClerc and had our final delivery of tiles, after chasing up the order; I think Fourgeaud had forgotten – again!

The highlight of the week for the LGB has been the septic tank being placed into the hole in the ground.  The lad who delivered the tiles lowered it in for us.  As soon as he left the LGB scampered away to get his spirit level and was tickled pink to find it was spot on!  He was like the cat that got the cream!

The building inspectors called today (the children from next door).  They had a friend in tow and had morphed into salesmen.  The friend, Pallas (pronounced palace – Brendan says she has probably got a brother at home called Buckingham) had made a little ‘bag’ and would we like to buy it.  When I asked what the money was for they said sweets.  Very honest, they could have said the down and outs of La Rochefoucauld or some other worthy cause; but when you are a kid sweeties are a very worthy cause.  Once I had parted with my 2€ the three of them then regaled us with the history of said bag.  In fact it had been hanging around for some months and as the stains would confirm it had been used for berry picking and in fact Felix had also spilt water on it.  They were in fits of laughter telling us this.   I teased perhaps they should have told us all this before the sale.  They said the company had been called ‘Bag Bargains’ but they had changed it to ‘Bad Bargains’.  More fits of giggles (us too I have to say).  They had sold one other bag with a handle at a discount price of 2€, the same price as ours with no handle. Duped by two eight year old and a nine year old, but it was worth it for the laugh we had.

Still wielding that paint brush!  Reclaiming the front garden little by little.  Nature has been behaving itself so nothing to report there.

We have put up a wooden fascia board on the kitchen and terrace.  I painted the first coat of one side today and then washed the guttering, brackets and downpipes.  The LGB says nobody washes guttering before it goes up.  I do!  One of my little foibles, and I have many, is that I hate labels being left on things (toilets, basins, guttering, pipes etc.) so they also had to be removed.  Why don’t companies use stickers that peel off easily? 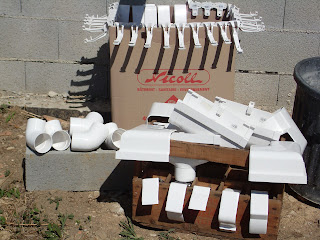 Today the LGB put the guttering up on the front and back of the house.  It was quite a mammoth task for him as he was doing it from the ladder.  This meant up and down 30 times to fix the brackets, moving the huge ladder each time, then up and down to fix the guttering and moving the ladder again.  He was absolutely exhausted by the end of the day and there wasn’t even a beer left in the fridge!  I assisted by leaning out the upstairs window and holding one end of the guttering with a broom.  We have all the mod cons to assist us you know.

We were too tired to even think about something to eat let alone cook it, so out came the twiglets (again) and a bottle of wine!
Posted by Home Wasnt Built In A Day! - Deborah at Sunday, September 16, 2012