A Glut of Goodies

I was going to wax lyrical tonight about all sorts of things but that last glass of wine has left me unable to even conjure a coherent sentence.  Thank goodness for spell checker!  This last sentence would have read; I was ggoinh to ewax tyrical tonight about all sots of thins but thath lat glass of wine has legft me unable to ……………………………….  You get the picture!!! 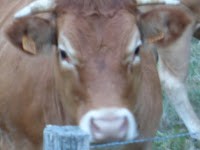 The French neighbours have arrived next door; they are here for a fortnight in their holiday home.  We haven’t started work as early as usual, mostly so as not to disturb them but also the mornings are darker.  Monsieur came over to say hello and we gave him a tour of the site.  I then spotted his wife making her way over.  We have never spoken to her before.
I said; ‘Ah, votre mari arrive’  (Ah, your husband is coming)
Monsieur replied ‘ No, c’est mon épouse.’ (No it’s my wife).
Thinking he had said somebody else was coming I said,
‘No, c’est votre mari’ (No it is your husband).
He insisted, ‘ No! Je suis le mari, elle est mon épouse.  !’ (No!  I am the husband, she is my wife!).
I really must get to grips with this blooming language!

So, I gave the second tour of the day.   I am thinking of investing in those head phones you get in stately homes and at Stone Henge that translate everything into a language of choice.  We could charge and make a few bob for the coffers and at least the visitors would understand the ‘tour’.  However, they were suitably impressed and muttered words like; ‘tres solide’ ‘chouette’ and ‘jolie’. The LGB thought I coped very well, but I was quite exhausted and had to go for a lay down to recover from the exertion.

We decided we would put wood cladding on the terrace roof to give it a tidier finish rather than just looking at the underside of the tiles.  We have completed this and tiled one side of the terrace and kitchen.  The other side is ready for tiling having been felted and double battened.  I have managed to get onto the roof and give a hand this time.  It takes me some time to get used to being up a height and I shuffle about on my bottom for a while but soon gain a little confidence.  The LGB says it is three nails per row that he doesn’t have to hammer in.  Every little helps!


We have had a week of nice little offerings; vegetables and plants from neighbours and friends; coming home to find a box filled with goodies – homemade chutney, jam, a squash and a plant; a cyclist passing and shouting ‘belle maison’; friends visiting; eating out with friends and just the two of us and finally meeting another neighbour, the mother of the lovely children (the building inspectors) who also made nice comments about the house and invited us for a drink. The little gestures can bring a smile.

I am continuing to paint a window here and there, whilst working out where the kitchen units will go so that we can get some doors made for them.

The football season has started.  I wonder how long it will be before the LGB erects the satellite dish and has the television out of wraps.  Of course he will say he is putting it together for me!  We stayed with The Old Bones On Bikes last night where we had our luxurious shower rather than the quick douche we have here and the LGB gets his teletext fix and catches up on the football news.  Most men bring their ladies a cup of coffee and a croissant in the morning; he ran up this morning empty handed to tell me Newcastle are in the same group as Bordeaux and we must try to get tickets (who says romance is dead)!

The neighbours over the road have been preparing and cutting their logs ready for the winter and many a tractor has gone by laden with logs.  We always get caught out as we never think about buying any in August when we are sweating in t-shirts and by the time the cold nights arrive we are too late and struggle to source a supply.  This year we have some ready but I’m not sure if it will be enough to see us through.  The petite voisine was on top of their log pile, it is taller than her and she jumped off like a gymnast finishing a routine on the horse.  She is in her sixties and was wearing wellies!  Amazing!

Work has been interrupted by rain and a couple of little storms and Friday we woke up to a chilly ten degrees and the fleece tops had an early airing.  The nights are drawing in and the sun is gone by 9.30 now.  The time has flown past.  All too soon the cranes will be flying off.


Not a very exciting week I'm afraid, but I had to upload something sitting here in my office, Quick Burger, waiting for friends to arrive in Angouleme.  Off for eats now, not Quick Burger I might add.

Email ThisBlogThis!Share to TwitterShare to FacebookShare to Pinterest
Labels: life in the charente