but you can’t take the town out of the girl. I use the term girl very loosely.  I was born in West London and raised in suburbia in Berkshire but I have always thought of myself as a country girl at heart.  It must go back to my roots.  My family on my paternal side are from farmland Wales (no sheep jokes, thank you) and my maternal side are from the bogs of rural Ireland (rumour has it via France, booted out during the revolution).

I love my own company.  I would venture into any large city on my own yet I am not terribly comfortable walking in quiet locations alone. I experienced a ‘girl about town’ moment of fretfulness recently when I was recycling on the outskirts of a local village.  The rubbish and recycling bins are tucked away in a little area opposite the cemetery behind some hedging, next to some woodland.  It was dusk as I was emptying the van and thinking to myself it was a little bit of a spooky place to be all alone.  My imagination always goes into overdrive. Who would notice if somebody leapt out of a wheelie bin to...... to what?  It's not like people round here do their recycling wearing a Rolex watch or the Crown Jewels or carrying a wallet stuffed with notes. It would also be highly unlikely that someone would  snuggle down amongst the black sacks in such a remote spot in the hope of a potential victim turning up.  They could be there days nestled between last weeks chicken carcass and the used kitty litter.  I was startled out of my daydream when I heard the clippety clop of footsteps.  I looked across the road to see a man and his lass walking past the cemetery.

I called ‘Bon soir' and monsieur returned a salutation but his lass, the cow, didn't answer.  I’m not casting aspersions over some woman I have never met; she really was a cow of the heifer variety.    I love the unexpected sights of country living. He was nonchalantly leading her along the road towards the village.  I am not sure where he was coming from with his bovine friend or where he was going or what his intentions were, I was just relieved that I wasn't in imminent danger of being mugged for my empty jam jars by one man and his cow! 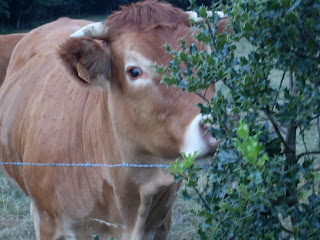 On the way home from choir I passed a couple of wild boars just up the road from the house.  I took a wide berth and slowed down but the little bugger head butted the side of the van and left a scratch down the side.  I presume his tusks made the scratch and it wasn't a wanton act of vandalism with a key.  I was a little disconcerted as we had walked that route in the dark at about the same time a few weeks back and it had gone through my mind then that we may have a close encounter with a sus scrofa and what would I do.  I decided I would hide behind a lamp post, well, not exactly hide as that implies I wouldn't be seen and I most certainly would be seen, even standing sideways breathing in.  However, there are no lamp posts!  Run?  I understand they can run quite fast and I can't! Maybe I should carry an emergency packet of pork scratchings or a pot of terrine de sanglier to waft at it's snout as a warning as to where he could end up. Seriously, what does one do in this instance?  I don’t think I will be walking home in the dark again any time soon.

I am now moving around the land when it is dark with a certain amount of trepidation.  During the summer I was scanning the awning for snakes before entering, I am now scanning the area for boars before exiting.  These creatures didn't look at all like some I had previously seen from a distance, they were more like little prehistoric mini woolly mammoths.  No, they weren't sheep and I wasn't drunk.


I went across to tell the French neighbour we would be away for a while.  When we got to saying our see you soons and have a nice time he raised his hand and in not so much of a girl about town moment but more a Deb in the hood or Deb from the block moment I actually gave him a high five.  A real 'yo bro, gimme a high five' jobbie!  I was absolutely mortified and can feel a blush coming up (again) just thinking about it.  I realised a slap too late he was just waving me off.  He flinched and looked a little startled.  I don't know what on earth possessed me to do it, I never do high fives! I hate it when sportsmen do it or contestants on shows when they get an answer right or anybody doing it.  The only high five I have ever done was more of a low five to a three year old. I can add a 75 year old Frenchman to that now!

Email ThisBlogThis!Share to TwitterShare to FacebookShare to Pinterest
Labels: high five, recycling, townie, wild boar, you can take the girl out of the town