Howling At The Moon

He’s thrown the dummy out of the digger!  I blame the full moon, seriously.  The LGB has been a PITA!  And I am not talking Greek bread.  I am talking Pain In The Backside (polite version).  The full moon really does have an effect on him.  It is the only time we come close to arguing.  Back me up on this Mary & Alan; you have seen him under the influence of the full moon.  Well you saw his backside in the light of a full moon!  His hirsute appearance should have been a warning.  It wasn't beard growth; the LGB was under a lycanthropic affliction, a werewolf to you and I.


Let me expand on this........... Tuesday we collected the beautiful oak that we had sized and cut at a local saw-mill.  We are both really pleased with them.  Obviously it is green oak so it will get 'shakes', open and crack, but this all just adds to the character.  These will be used as the lintels over the windows and doors in the single storey part of the house which is the kitchen/breakfast/family room. 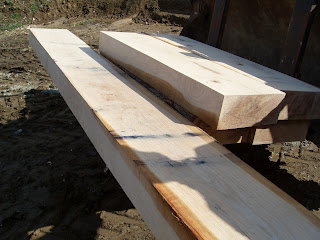 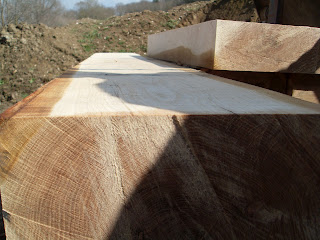 As the oak lintels were too heavy for us to lift Daisy the digger was put to use.  The first one the LGB put up with the forks on the digger.  No problem there.  The second one he had to hang from the digger bucket with slings and manoeuvre it into place because this door was not accessible with the forks.  All cushty so far.  The third one the LGB decided to do with the slings again.  I am not sure what stick he miss-hit but the oak beam swung through the air like a trapeze artist.  Naturally I was somewhat alarmed and as I didn't want to become part of the circus act being catapulted through the air on the end of an oak log or worse, decapitated I became a little cautious.  A lecture quickly followed the flying dummy!  I was 'given wrong' for being a scaredy cat.  The beam wasn't going to fall on me or fall to the ground, I should have more faith in him, blah, blah, blah!!  The last beam, the largest he put up with the forks and thankfully with no problem.

Thankfully his little tantrums don't last long - certainly not as long as my silent treatment!

The blip aside.  We are really chuffed with the oak beams.  I would never have believed I could get so excited about wood, but I love it – the smell, the feel, how it ages.  I wish I was clever enough to be able to make beautiful things out of it.  Before we put them up I sanded them and as I want to keep them looking as natural as possible I thought I would just put a coat of wax on them.  Job done except what I thought was wax was actually polish, but no harm done. 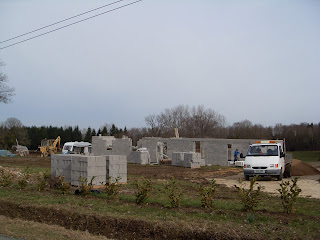 The little French neighbour commented that we were nearly ready for the roof.  She was very shocked when I said we had another floor to build yet, she thought it was a bungalow.  I half wish it was!  I am not looking forward to putting on the roof.  I have managed to help on two barn roofs and the garage roof but they were not two storeys up.  I am not sure I will be much use on the house roof.  The company who are making the roof trusses came out to do a final measure.

When we went to go home the truck wouldn’t start because I had left the lights on!   Craig to the rescue with a jump-start!

Our eviction date draws nigh.  Little by little we are moving things over to La Serve.   We are still pondering the dilemma of showering when we are in the caravan.  A season ticket to the swimming baths is looking like the favourite solution!
Next full moon April 6th.  Schedule day off.  Buy some garlic (works for vampires).