I often find myself counting backwards from a zillion to enduce a little slumber when it evades me in the wee small hours, but to no avail.  My efforts at counting sheep don’t help either.  I like to count my sheep one at a time as they jump over a hedge, but I always get the miscreant masticating mutton who rebels and doesn't want to follow the crowd (or sheep) and stops to ruminate on a juicy blade of grass and then I forget where I am.
My best escape from insomnia is singing a chorus to a song over and over again.  Not out loud because that would wake the LGB up and he would be none too pleased because by the time I start the singing I will already have tossed and turned and disturbed him, switched the light back on and read until I could keep my eyes open no longer, switched the light off to huffs and puffs from the other end of the duvet, snuggled back under the duvet and immediately become a member of the Wide Awake Club again.  So I just sing in my head. I compose (in my head also) the most amazing literary masterpieces worthy of a nomination for the shortlist of Dozy Author of the Year and witty, informative posts for the blog during these restless times.  The words pour forth out of the darkness but when the morning comes I can never remember a ruddy word!  Actually, on this occasion I do remember thinking about St Patrick’s Day but little more.

I touched on St Valentine in my last post, this time I feel St Patrick is worthy of a little mention (in a non-liturgical way) if only because my maternal grandparents were Irish and of course he is always a good reason to have a little shindig.  I wrote that the LGB doesn't celebrate St Valentine’s Day but strangely he is always ready to raise a pint of Guinness to St Patrick. His parents were Irish (not St Pat's, the LGB's) and he is often asked what part of Ireland he comes from even by the Irish. They mistake his Northumbrian accent for an Irish one. I put their mistake down to his leprechaunian good looks! 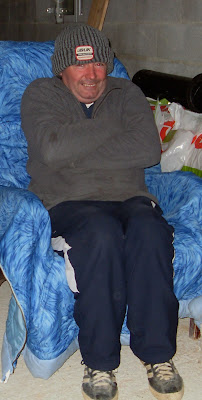 Those of you who know him best know how appropriate the image on the right is!

I think I would have had a lot of time for St Pat, rumour has it he drove all the snakes out of Ireland.  It’s just a shame he didn’t move his way around Europe and do a little snake droving there.  I really don’t like snakes.  It’s only in recent years I have I been able to even look at them on television. You can tell me until I’m blue in the face that they are more scared of me but it doesn’t wash.   When we moved to France we lived in a house with a round bedroom that opened onto the garden.  A very long snake got in one day.  My immediate response was to shut the door.  The LGB wasn’t too impressed because he was still in the room.  He was even less impressed when I threw in a Vileda squidgy mop for him to fight it off!  I have been trapped on the terrace by one that I swear was giving me the evil eye.  I’ve been far too close for comfort to a coiled heap when picking tomatoes and had one in the caravan awning.  I go into panic mode and my brain turns to blamanche.  I would put them in Room 101 along with spiders, flies, mosquitoes and rats.

Back to St. Paddy.  There will be many the world over having a shindig and enjoying the craic today. There will be parades and celebrations in New York, Dublin, Boston, Sydney and at D & C’s in Courcôme, France (which is where we should be).  So, Happy St Patrick’s Day to you one and all.

May the roof above us never fall in,
And may we friends beneath it never fall out.

Probably not the most appropriate toast from a builder and labourer but the sentiment is there!