No internet access this week so I am late with last weeks blog.  My apologies to those of you who have been trying to leave comments.  I don’t know what the problem is.  I have tried to Google a solution but to no avail.  Please keep trying as it is always nice to get them.  Thank you anyway for the messages coming through other sources.

Last Thursday evening when we pulled up beside the caravan I noticed the farmer had taken the bales of hay.  The LGB didn’t notice the absence of three four feet high bales.  On Sunday evening I was taking photos of clouds (you know me and clouds; I’m a sucker for a bit of the fluffy stuff).  The LGB said ‘Isn’t the grass green?’  I knew where this was going and replied in the affirmative. ‘Take a photo of the field.’ says he.  ‘No, I want the clouds.’ says I.  He gave a little titter and said ‘You’re not very observant are you?’  ‘Why’s that?’ says I.  ‘Because you haven’t noticed that the hay has gone.’ replies Inspector Clouseau in his I’m so alert, sharp-eyed and on the ball sort of way.  I poke him in his ever shrinking belly and answer ‘No, you’re not very observant you fluffy-headed numpty, the farmer took the bales three days ago.’  One, nil, oooonnnnnne nil, one, nil, one, nil.  You’re not singing anymore!!!!!!  (If you don’t follow or go to football you will not have a Scooby-doo what that is all about.) 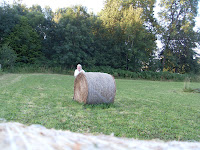 This week we collected the windows and vent tiles we had on order having been notified they had arrived.  When we arrived we were told one window was missing!  Just one more spanner in the works and another trip into Angouleme on another day.  We weren’t looking forward to loading the windows but the lad in collections got them on our truck on a pallet with the LGB stood on one side to balance it.  Health & Safety would have had a fit.

En route we collected an armoire I had purchased at the weekend and of course we had to have another little browse around the depot vente and came away with a big oak table and a plant pot!  We really shouldn’t be let loose.  The LGB was convinced the onlookers at Leroy Merlin were tittering and saying ‘Zees Anglaises zay buy all our old rrrubbeesh’.  I’ve said it before; one man’s rubbish ……… and all that.

Anyway being a full moon I knew Grumpy would make an appearance.  I was right.  I wasn’t lifting the windows properly, putting them down correctly, I was being a scaredy cat, too cautious, too slow, wrong Stanley knife, and so on.  His affliction reappeared, you know, the one where the thought doesn’t quite reach the bouche!  I think he thinks because I’m built like a battleship I should be able to perform like one, unfortunately I’m more your blow up dinghy in these situations.  But hey, even they could save your life!  Once again my thoughts turned to wanting to ‘lamp him one’.  So I did.  As soon as the windows were stacked I made a hasty escape for some retail therapy and I hit him where it really hurts ………… right in the wallet! Ouch!

P.S.  I am not a violent person and have never hit him physically.  I have my urges well under control – for now.  Now tell me again Mrs Bobbitt what you did when your husband p****d you off? OUCH!

Back to more serious matters.  I’ll give credit where credit is due - the roof is coming on a treat.  To look at it, it is all but covered.  The LGB had to take a couple of hundred tiles up the ladder on his shoulder (not in one go), pretty exhausting.  Now of course is the time consuming bit – all the ridge tiles to put up and cementing them in place.  This will also be a bit trickier as the LGB will have to take off his safety harness and do it free rein. All this has been done whilst he has been visiting the back doctor a couple of times a week.  He’s a martyr to the cause. 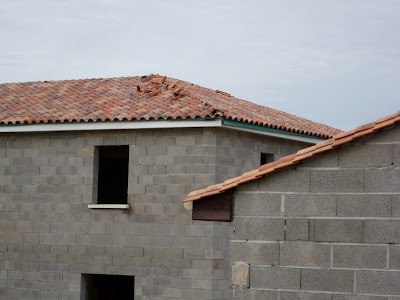 Sadly I have not been able to help with the roof apart from loading the tile hoist.  I have been sanding and cleaning bits of furniture we have bought and generally tidying up the site.

I love shutters that are crumbly and flaking and rusty gates, but I think the neighbours would think I had completely lost my marbles if I did ours like that.  The LGB would be none too pleased either.  I nearly resorted to pinning the tail on the donkey again to choose the colour for the windows and shutters when we finally managed to whittle the myriad of colours I had torn out and earmarked down to a grey.  Whereupon I immediately changed my mind to Pebble Drift, the one I had had in mind all along. I thought a grey grey would be too oppressive and bland on an overcast day, so I opted for a blue grey.

I handed my miniscule sample over to the lad in the paint department and requested a matt finish.  No, no matt finish so I opted for the satin and ran away before I could change my mind.  I did a few laps around the aisles whilst waiting for the paint to be mixed.  He waved me into the pit stop and took the lid off the paint pot.  It looked nothing like the colour I wanted, but I said it was fine, grabbed the pot and jogged to the checkout and paid before I could plonk it on a shelf somewhere and leave empty handed.  I questioned the total bill but was assured it was correct.  On further inspection outside I had been charged twice and at 75€ for 2.5 litres I returned for a refund.

I am not sure what goes on with the paint in France.  It is hugely expensive and the quality is not good.  The same makes in the UK cost a fraction of the price.  When we did the barn conversion we went to a specialist paint shop and bought 6 litres of paint at a cost of 210€!  What I thought was the price per pot was actually price per litre.  But to be fair, it was good paint.  I have so far painted one window to test the colour, but the jury is out at the moment.  At that price I am sure I will learn to love it. I have some Farrow and Ball earmarked for inside the house but will have to arrange a mortgage before buying that here.

The LGB is having Saturday and Sunday away from carrying tiles because Dr Crochet more or less said what was the point  him treating Brendan when he wasn’t resting his back.  So, today I began sanding all the windows in preparation for painting.  I’m not happy with the one I put a coat on yesterday, it is too blue.  A second coat has gone on today.